Stream TV and Video Content Over Your Campground's Wi-Fi 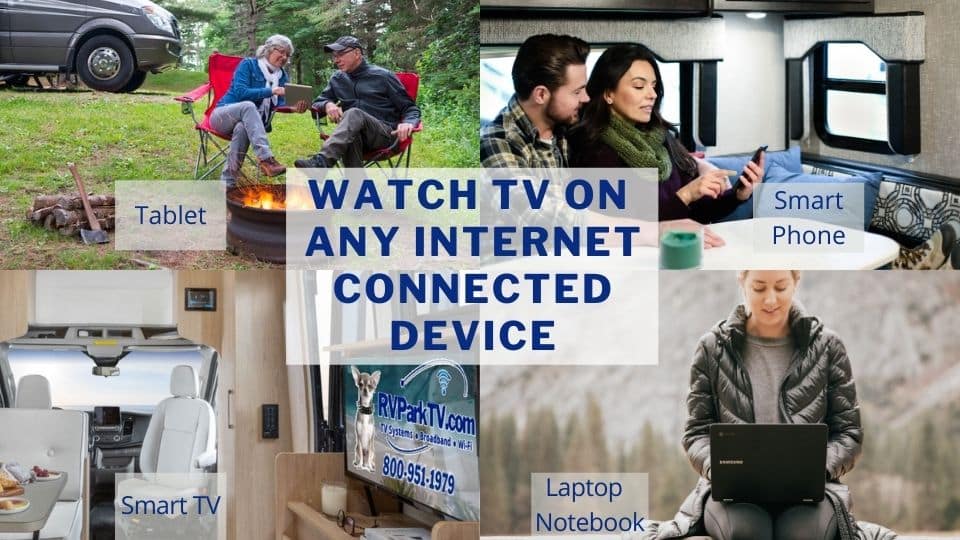 Stream Satellite and Local High Definition TV Channels and other video content over your Wi-Fi network.  Whether its Local Channels via an off-air antenna or Satellite services like DIRECTV, your campers can watch LIVE TV on any Internet Connected Device within your WiFi network’s footprint throughout your RV Park or Campground.

Today your campers want to watch TV and Videos on their Smartphone, Tablet, and Laptop as well as on a TV. You can make that possible for your guests when you use our IPTV (Internet Protocol Television) TV system that makes it possible to Stream TV over Your WiFi.

Some examples of IPTV Streaming you may be familiar with are Video on Demand and Netflix, HBOMax, and Disney +.  Streaming is quickly becoming popular due to trends towards internet connected mobile devices.

At RVParkTV.com we have the newest technology to STREAM TV over your WiFi Network!

What is Internet Protocol Television (IPTV)

The major difference between traditional cable TV and IPTV streaming is the fact that with a cable box every signal from every channel is “ready to go” at the cable box.  With our streaming TV system users on your WiFi network are only getting the feed of the channel they have selected, not all the channels.  This way it doesn’t overwhelm your network when multiple users log on.

What are the benefits when you Stream TV Over Your WiFi?

While there are several distinct benefits when you stream TV over your Wi-Fi network, at the top of the list is that with WiFi Streaming your park does not have to have or maintain an underground cable plant to deliver TV to your campers.

You can save thousands of dollars by not having to install a coaxial system at a new park or updating or upgrading coaxial distribution at an existing campground.

There is no disruption to your park when you stream TV content over your wi-fi network, no trenches to dig, no lines to repair from guests pulling out of a spot still connected or landscaping mishaps such as cut lines or water damage to existing coaxial distributions.

By streaming, the TV at your park can be accessed through your WiFi network on your guests Smart TV, Smartphone, Tablets, PC’s and Laptops.

Your campers can Stream everything from Live Television to Movies to your own In-House Community Channel.

Our Streaming Technology uses predictive streaming that “dummies” down the full blown 1080P to a 480P packet, so it is only using 2.5 to 3.0 mbps per device.

That minimizes the impact on your network and allows more users to be logged on at one time.

STREAMING is the next evolution of TV for your RV Park or Campground and with so many benefits and increased demand for Streaming Services it is clear to see why it is becoming such a popular way to send video content.

Streaming is changing consumer behavior and its critical to have a Strong Host WiFi Network from a Trusted Partner when it comes to maximizing your Streaming performance and user experience.  RVParkTV.com is here to help!

Whether your goal is to provide an Amenity level WiFi that allows your guests to surf the web and check email or a WiFi system that allows them to Stream TV and be Monetized,  RVParkTV.com offers WiFi and TV packages specifically designed for your RV Park and Campground.

The Ultimate HD Entertainment Experience. DIRECTV gives you the flexibility to offer the quality entertainment your campers want at the affordable prices you need. Bring a more enjoyable, a more affordable, entertainment experience to your park today.

Up to 20 of your local channels with no monthly programming fee.